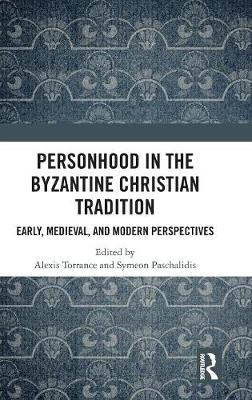 Bringing together international scholars from across a range of linked disciplines to examine the concept of the person in the Greek Christian East, Personhood in the Byzantine Christian Tradition stretches in its scope from the New Testament to contemporary debates surrounding personhood in Eastern Orthodoxy. Attention is paid to a number of pertinent areas that have not hitherto received the scholarly attention they deserve, such as Byzantine hymnography and iconology, the work of early miaphysite thinkers, as well as the relevance of late Byzantine figures to the discussion. Similarly, certain long-standing debates surrounding the question are revisited or reframed, whether regarding the concept of the person in Maximus the Confessor, or with contributions that bring patristic and modern Orthodox theology into dialogue with a variety of contemporary currents in philosophy, moral psychology, and political science. In opening up new avenues of inquiry, or revisiting old avenues in new ways, this volume brings forward an important and on-going discussion regarding concepts of personhood in the Byzantine Christian tradition and beyond, and provides a key stimulus for further work in this field.

3 Personhood in miaphysitism: Severus of Antioch and John Philoponus

4 Hypostasis, person and individual according to St Maximus the Confessor, with


reference to the Cappadocians and St John of Damascus

5 Mary, the Mother of God, in dialogue: the drama of personal encounter in the Byzantine liturgical tradition

7 The exemplar of consubstantiality: St. Gregory Palamas' hesychast as an expression of a microcosmic approach to personhood

8 Nicholas Cabasilas of Thessaloniki: the historical dimension of the person

9 Freedom, necessity and the laws of nature in the thought of Gennadios Scholarios

10 Flesh and Spirit: divergent Orthodox readings of the iconic body in Byzantium


and the twentieth century

11 Nikos Nissiotis, the "theology of the '60s" and personhood: continuity or discontinuity?

12 Eastern Christian conceptions of personhood and their political significance