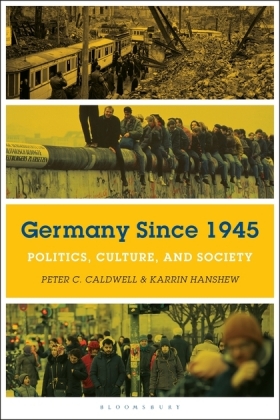 Peter C. Caldwell and Karrin Hanshew's Germany Since 1945 traces the social, political and cultural history of Germany from the end of the Second World War right up to the present day. The book provides a narrative that not only explores the histories of East and West Germany in their international contexts, but one that also takes the significantly different world of the Berlin Republic seriously, analyzing it as a distinct and significant period of German history in its own right. Split into three parts roughly devoted to a quarter-century each, this book guides students through contemporary Germany from the catastrophe of war, genocide and the country's division to the very different challenges facing the reunified Germany of the 21st century. There are key primary source excerpts integrated throughout the text, as well as 32 images, numerous maps, charts and tables and a detailed bibliography to further aid study. The book is complemented by online resources which include sample syllabi and a pedagogical supplement. Germany Since 1945 underscores both the particularities of German history and the international trends and transactions that shaped it, giving good coverage to key aspects of post-1945 German society and politics, including: * East and West German paths to reconstruction * The development of consumer society and the welfare state * The politics of memory and coming to terms with the Nazi past * The Cold War * New social and political movements that opposed the postwar status * Immigration and the move toward a multicultural society This is an essential text for any student of contemporary German history. One of the best recent general introductions to post-WW II German history, this volume examines the political, economic, cultural, and social history of a separated Germany ... Summing Up: Recommended. Upper-division undergraduates; graduate students. * CHOICE * Caldwell and Hanshew have written the best general introduction to the history of Germany since 1945. Based on the most up to date sources, well organized and well written, this vibrant book provides a thorough and clearly argued overview of the major social, economic, political and cultural developments in contemporary German history. * William T. Smaldone, E. J. Whipple Professor of History, Willamette University, USA * Simply superb! Caldwell and Hanshew combine an insightful and clear narrative of Germany's economic and political rise in Europe with captivating illustrative quotations, images and examples. An outstand

List of Illustrations
List of Document Excerpts
Acknowledgements
List of Abbreviations
Introduction: Total Defeat
Part One: Dividing Germany, 1945-1970
1. Germany's "Zero Hour"
2. New States, East and West
3. Stability, Consolidation, and Dissent in West and East
4. Politics and Generational Change in 1960s West Germany
5. Behind the Wall: East Germany on a New Path
Part Two: New Beginnings, 1969-1992
6. New Social Republics, East and West
7. Crisis and Change: The Federal Republic in the 1970s
8. The Socialist Nation and the Rise of Dissidence: Honecker's East Germany
9. The Paradoxical Conservatism of West Germany under Helmut Kohl
10. Collapse, Revolution, Unification, 1989-1990
Part Three: The Berlin Republic, 1990-2017
11. Tensions of Unification
12. The Berlin Republic, the Red-Green Coalition, and the Identity of the New Germany
13. Economics, Politics, and Diplomacy of a Civilian State, 2007-2017
Index