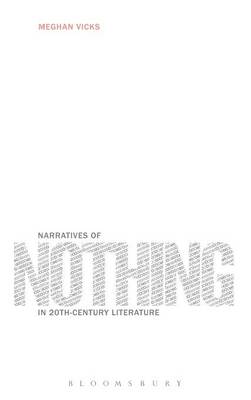 Narratives of Nothing in 20th-Century Literature

The concept of nothing was an enduring concern of the 20th century. As Martin Heidegger and Jean-Paul Sartre each positioned nothing as inseparable from the human condition and essential to the creation or operation of human existence, as Jacques Derrida demonstrated how all structures are built upon a nothing within the structure, and as mathematicians argued that zero - the number that is also not a number - allows for the creation of our modern mathematical system, Narratives of Nothing in 20th-Century Literature suggests that nothing itself enables the act of narration. Focusing on the literary works of Vladimir Nabokov, Samuel Beckett, and Victor Pelevin, Meghan Vicks traces how and why these writers give narrative form to nothing, demonstrating that nothing is essential to the creation of narrative - that is, how our perceptions are conditioned, how we make meaning (or madness) out of the stuff of our existence, how we craft our knowable selves, and how we exist in language.

Narratives of Nothing in 20th-Century Literature

Chapter Zero: Introduction: Nothing and the Twentieth Century

Odysseus : Outis
Khora : Socrates : Knowing Nothing
Much Ado About Nothing
Narratives of Nothing

Chapter One: Theorizing Nothing

Zero
Nothing and Being: Heidegger and Sartre
Nothing and Narrative: Nietzsche, Derrida, Bakhtin, and Kristeva

Chapter Three: "Working in a Void": Vladimir Nabokov and the Semiotics of Nothing

Muzhiks Working in a Void
The Otherworld and Loss
The Real Life of Sebastian Knight: Reality as Nothing and the Aesthetics of Failure
"Signs and Symbols": Patterning and Nothing

Nothing happens, more than once
Critical Approaches to Beckett and Nothing
Aesthetics of Lessness
Beckettian Immanence
Molloy: Questing Immanence
Aesthetics of Immanent Nothing

Pelevin's Postmodernism
Engineering the Human Soul
Pelevin's Divine Absurdity: The Void
Nihilistic Nothing in Generation "P"
Sacred Nothing in Chapaev and Void and The Sacred Book of the Werewolf

Conclusion: Nothing as the Transcendental Signified