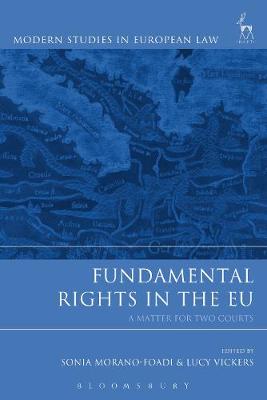 Fundamental Rights in the EU: A Matter for Two Courts

This collection joins the new and expanding scholarship on the protection of fundamental rights in Europe and reflects on the relationship between the Court of Justice of the European Union (CJEU) and the European Court of Human Rights (ECtHR). The book questions whether the changes introduced by the Lisbon Treaty align the CJEU to the ECtHR's interpretation and methods, triggering different processes of institutionalisation within a coherent European system. These issues are explored through a contextual analysis of areas of law such as equality rights in employment law, citizenship and migration, internet law and access to justice. This volume includes perspectives from the scholarly community as well as practitioners, judges and European policy makers. It also examines the state of accession of the EU to the European Convention on Human Rights (ECHR) and considers the legal implications of the interactions of the two courts for the protection of the fundamental rights of EU citizens and individuals legally residing in Europe. The volume is essential reading for practitioners, judges, European policy makers and members of the scholarly community working in this area of law.

Fundamental Rights in the EU: A Matter for Two Courts

1 . Introduction-A Matter for Two Courts: The Fundamental Rights Question for the EU
Sonia Morano-Foadi and Lucy Vickers
PART I
2. The Place of the EU Charter within the Tradition of Fundamental and Human Rights
Dr Niilo Jaaskinen
3. Closing the Gaps in the Protection of Fundamental Rights in Europe: Accession of the EU to the ECHR
Kristi Raba
4. Problems and Challenges of the EU's Accession to the ECHR: Empirical Findings with a View to the Future
Stelios Andreadakis
5. The EU Human Rights Regime Post Lisbon: Turning the CJEU into a Human Rights Court?
Wolfgang Weiss
PART II
6. European Judicial Dialogue and the Protection of Fundamental Rights in the New Digital Environment: An Attempt at Emancipation and Reconciliation: The Case of Freedom
of Speech
Oreste Pollicino
7. Migration and Human Rights: The European Approach
Sonia Morano-Foadi
8. Who has the Right to have rights? The Judgments of the CJEU and the ECtHR as Building Blocks for a European 'ius commune' in Asylum Law
Samantha Velluti
9. More is Less? Multiple Protection of Human Rights in Europe and the Risks of Erosion of Human Rights Standards
Titia Loenen and Lucy Vickers
10. In Extending Human Rights, which European Court is Substantively 'Braver' and Procedurally 'Fitter'? The Example of Sexual Orientation and Gender Identity Discrimination
Robert Wintemute
11. Access to Justice in the Recent Grand Chamber Judgments of the European Court of Human Rights Dragoljub Popovic
12. Fundamental Rights and Judicial Cooperation in the Decisions of the Court of Justice on the Brussels I Regulation 2009-2014: The Story So Far
Lorna Gillies
13. Concluding Remarks
Sonia Morano-Foadi and Lucy Vickers