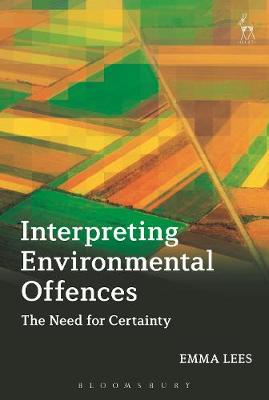 This book analyses the interpretation of environmental offences contained in the waste, contaminated land, and habitats' protection regimes. It concludes that the current purposive approach to interpretation has produced an unacceptable degree of uncertainty. Such uncertainty threatens compliance with rule of law values, inhibits predictability, and therefore produces a scenario which is unacceptable to the wider legal and business community. The author proposes that a primarily linguistic approach to interpretation of the relevant rules should be adopted. In so doing, the book analyses the appropriate judicial role in an area of high levels of scientific and administrative complexity. The book provides a framework for interpretation of these offences. The key elements that ought to be included in this framework-the language of the provision, the harm tackled as drafted, regulatory context, explanatory notes and preamble, and finally, purpose in a broader sense-are considered in this book. Through this framework, a solution to the certainty problem is provided. Lees makes a significant contribution to environmental law discourse, which is academically stimulating and has the potential to be practically important. -- Neil Parpworth Principal Lecturer in Law, De Montfort Law School * Environmental Law and Management *