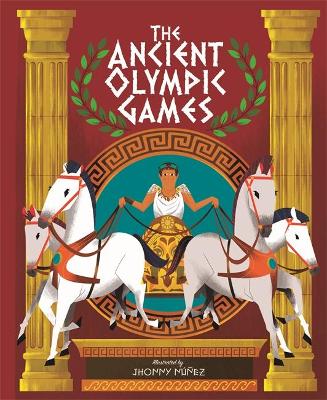 Travel back in time to Ancient Greece to discover the origins of the Olympic Games. Bright, bold and dynamic artwork bring to life the origins of the Olympic Games. Find out about the legend behind the games, the original events and the excitement that filled Olympia during the Olympic Festival. See how the competitors used to train and learn about each of the original events that took place, including chariot racing, wrestling, the discuss, javelin and boxing. Get the Olympic buzz from all the excitement of the hippodrome, Olympic ceremonies and celebrations, and learn about the importance of the Heraia - the competition for women organised by women. This book provides a brilliant and striking introduction to the Ancient Olympics for children aged 7+.