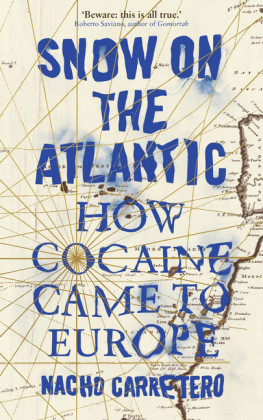 Snow on the Atlantic

Smuggling has been a way of life in Galicia for millennia. The Romans considered its windswept coast the edge of the world. To the Greeks it was from where Charon ferried souls to the Underworld. Since the Middle Ages, its shoreline has scuppered thousands of pirate ships. But the history of Cape Finisterre is no fiction and by the late twentieth century a new and exotic cargo flooded the cape's ports and fishing villages. In Snow on the Atlantic, the book the Spanish national court tried to ban, intrepid investigative journalist Nacho Carretero tells the incredible story of how a sleepy, unassuming corner of Spain became the cocaine gateway into Europe, exposing a new generation of criminals, cartels and corrupt officials, more efficient and ruthless than any who came before. 'A Spanish story nobody ever told. A unique story, written with a novel's prose, but beware: this is all true.' Roberto Saviano, author of Gomorrah: Italy's Other Mafia 'Adds a dramatic new chapter to the saga of Colombia's infamous drug lords - revealing their corrupting influence far beyond the capitals of Cali and Medellin. Intrepid investigative journalist Nacho Carretero has delivered history written as an action thriller and filled it with intriguing characters.' William C. Rempel, author of At the Devil's Table 'Just as the coast of Galicia has become a gate-way for one of the most potent substances to flood Europe, this excellent book becomes an entry point into understanding a crucial aspect of the history of our continent - an aspect historians so far have overlooked.' Norman Ohler, author of Blitzed: Drugs in Nazi Germany 'There are some books that can never be silenced.' Booksellers Guild of Madrid

Snow on the Atlantic

By Land, Sea and Ria

The Sea: Costa da Morte Legends
The Land: A Raia Seca, Blackmarket Beginnings
The River: A Raia Mollada, The Embryo

Marlboro Celta
"Contrabandists are the Most Honourable People Around"
Batea Winstons
Peseta Connection
"A Bootlegger, Like My Papa"
The Smoke Lords
When the President of the Galician Regional Council Met the Capos

We Had No Idea
The Pioneers

"Sito Minanco, Political Prisoner."
Laureano Oubina in Clogs
The Charlins, a Clan "A La Siciliana"
Marcial Dorado, On His Yacht with the President

Let Us Live
Rise Up

The Puzzle
The Big Roundup

After Necora
The Others
The Fall of the Oubina Empire


Changing of the Guard


Tracks in the Snow