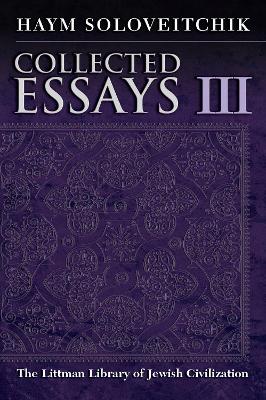 Two main areas of medieval Jewish thought are explored in this collection of previously published and new essays. A section on Sefer Hasidim brings together over half a century of Soloveitchik's writings on German Pietism, many of which were published in out-of-the-way places, and adds two new essays. The first is a methodological study on how to read Sefer Hasidim, a baffling potpourri of pietistic sayings, religious practices, and stories, and on what constitutes (and does not constitute) a valid historical inference. The second new essay, `Sefer Hasidim and the Social Sciences', is a guide to the soundness of a number of sociological and anthropological inferences that have been drawn from that work in contemporary historiography. A section on R. Avraham ben David of Posquieres updates Soloveitchik's `Ravad of Posquieres: A Programmatic Essay', a highly influential essay which argued that, throughout the Middle Ages, Ravad was known and his influence determined by his role as talmudic commentator, not by his now-famous critiques of Mishneh Torah, which were largely unknown in that period. He has added a new essay on the acrimonious relationship between Ravad and R. Zerahyah ha-Levi of Lunel and the tensions that existed between the stormy, low-born genius of Posquieres and the Jewish aristocracy of Languedoc, particularly of Lunel.

PART I. SEFER HASIDIM
Specific Studies
1. Three Themes in Sefer Hasidim
2. On Dating Sefer Hasidim
3. Piety, Pietism, and German Pietism: Sefer Hasidim I and the Influence of Hasidei Ashkenaz
4. Pietists and Kibbitzers
5. The Midrash, Sefer Hasidim, and the Changing Face of God
6. Two Notes on the Commentary on the Torah of R. Yehudah he-Hasid
7. Topics in the Hokhmat ha-Nefesh