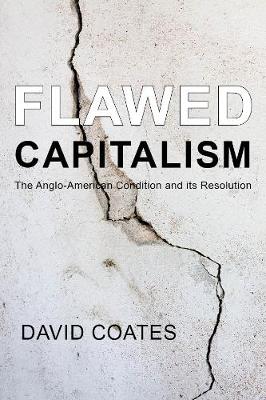 Flawed Capitalism: The Anglo-American Condition and its Resolution

Drawing on over four decades of research and writing on the political economy of the UK and United States, David Coates offers a masterly account of the Anglo-American condition and the social and economic crisis besetting both countries. Charting the rise and fall of the social settlements that have shaped and defined the postwar years, Coates traces the history of the two economies through first their New Deal and then their Reaganite periods - ones labelled differently in the UK, but similarly marked by the development first of a Keynesian welfare state and then a Thatcherite neoliberal one. Coates exposes the failings and shortcomings of the Reagan/Thatcher years, showing how the underlying fragility of a settlement based on the weakening of organized labour and the extensive deregulation of business culminated in the financial crisis of 2008. The legacies of that crisis haunt us still - a squeezed middle class, further embedded poverty, deepened racial divisions, an adverse work-life balance for two-income families, and a growing crisis of housing and employment for the young. Flawed Capitalism deals with each in turn, and makes the case for the creation of a new transatlantic social settlement - a less flawed capitalism - one based on greater degrees of income equality and social justice. As members of the millennial generation come to their maturity on each side of the Atlantic, Flawed Capitalism offers the critical intellectual tools that they will need if they are ever to break decisively with the failed public policies of the past.

Flawed Capitalism: The Anglo-American Condition and its Resolution

1. The Anglo-American condition: similarities and differences


Part I Flawed Economies
2. The rise and fall of American economic leadership
3. Chasing hard and standing still: the UK economy in the American shadow


Part II Divided Societies
4. The fading of the American dream?
5. The slow disintegration of the UK's postwar social settlement


Part III Inadequate Politics
6. The continuing costs of empire
7. The folly of austerity politics
8. Conclusion: towards a better future