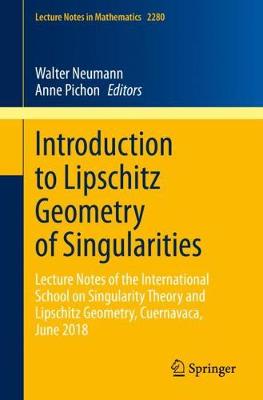 This book presents a broad overview of the important recent progress which led to the emergence of new ideas in Lipschitz geometry and singularities, and started to build bridges to several major areas of singularity theory. Providing all the necessary background in a series of introductory lectures, it also contains Pham and Teissier's previously unpublished pioneering work on the Lipschitz classification of germs of plane complex algebraic curves.

While a real or complex algebraic variety is topologically locally conical, it is in general not metrically conical; there are parts of its link with non-trivial topology which shrink faster than linearly when approaching the special point. The essence of the Lipschitz geometry of singularities is captured by the problem of building classifications of the germs up to local bi-Lipschitz homeomorphism. The Lipschitz geometry of a singular space germ is then its equivalence class in this category.

The book is aimed at graduate students and researchers from other fields of geometry who are interested in studying the multiple open questions offered by this new subject.