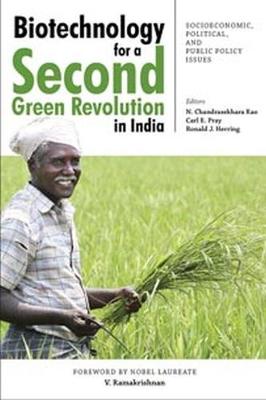 This book is the first of its kind in examining the role of biotechnology for reviving Indian agriculture and accelerating farmers' incomes. It examines the empirical evidence in various agro-ecologies on already commercialised technologies, and also technologies on shelf like Bt brinjal, and herbicide tolerant maize and cotton. The political economy behind the public policies for biotechnologies, reasons for continuing controversies, and impacts of labelling policies and seed-pricing controls are examined in greater detail. In the past few years, discussion on genetically engineered crops has been particularly contentious, in the backdrop of concerns on food security and dominance of multinationals. However, dispassionate analysis of these technologies for their usefulness in Indian context has been missing. This book addresses this gap in extant literature and contains chapters by several renowned scholars from India and abroad, and can be a useful guide to students, civil society, policy makers, and researchers working on Indian agriculture.

Contents
List of Tables and Figures
Acronyms
About the Editors/Contributors
Foreword
Director's Message
Acknowledgements
Biotechnology for Second Green Revolution in India: Overview of Issues
Section 1
Macro Issues
1. Politics of Biotechnology: Ideas, Risk, and Interest in Cases from India
2. The Competing Policy Paradigms of Agricultural Biotechnology: Implications and Opportunities for Emerging and Developing Economies
3. Labelling GM Food in India: Anticipating the Effects on GM Brinjal and Rice Marketing Chains
4. Bt Cotton in India: A Review of Adoption, Government Interventions and Investment Initiatives
5. Welfare Gains from Application of First Generation Biotechnology in Indian Agriculture: The Case of Bt Cotton
Section 2
New Technologies on the Horizon
6. Potential Economic Benefits from Adoption of Bt Brinjal Hybrids in India
7. The Potential Economic Impacts of Herbicide Tolerant Maize in Developing Countries: A Case Study
8. Technology Adoption and its Impact on Labour Use: The Case for Herbicide Tolerant Technologies
Section 3
Evidence on Performance of Bt Cotton
9. Empirical Analysis on the Impact of Private Sector R&D on Cotton Productivity in India
10. Socioeconomic Impacts of Bt Cotton Adoption in India: Evidence from Panel Data
11. Economic and Environmental Performance of Bt Cotton in India
12. Bt Cotton Cultivation in Maharashtra: An Economic Analysis Based on Field Data
13. Technology Diffusion and Adoption in Cotton Cultivation: Emerging Scenario in Gujarat
14. On the `Failure of Bt Cotton': Analysing a Decade of Experience
Index