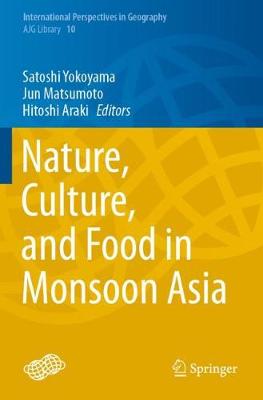 The giant Asian monsoon has formed a diverse climate and natural environment. The Asian monsoon climate manifests itself in manifold ways depending not just on the latitude or altitude of an area but also on physical conditions such as topography and vegetation and even the size of its human population. Likewise, the livelihoods of people in the affected area are diverse. This book focuses on nature and agriculture, food, and climate and culture as an excellent framework for understanding the relationship between humans and the environment in complex Monsoon Asia. Through the discussions in this book, what the authors have sought to demonstrate is that the livelihoods in Monsoon Asia demonstrate unique forms in a limited environment, while the Asian monsoon climate has one of the largest movements of any natural phenomenon on a macroscopic scale. These manifest forms are diverse both on a time scale and on a spatial scale and are extremely diversified in limited regions. Such diversity is not only due just to the effects of the natural environment but also results from social and cultural forces. In this area of Monsoon Asia, traditional and religious social norms are becoming entangled with "new" economic and political norms brought in from the outside world by globalization.


PART I NATURE AND AGRICULTURE


Chapter 9: Nepalese Food and Its Socio-cultural Climate: Changing Dal-bhat Inside and Beyond Nepal (Izumi Morimoto)