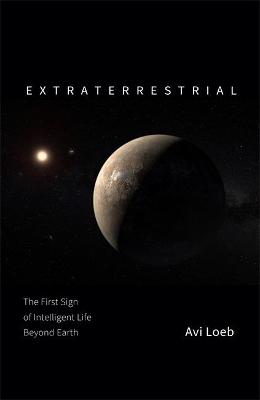 In late 2017, scientists at a Hawaiian observatory glimpsed a strange object soaring through our inner solar system. Astrophysicist Avi Loeb conclusively showed it was not an asteroid; it was moving too fast along a strange orbit, and leaving no trail of gas or debris in its wake. There was only one conceivable explanation: the object was a piece of advanced technology created by a distant alien civilization.

In Extraterrestrial, Loeb takes readers inside the thrilling story of the first interstellar visitor to be spotted in our solar system. He outlines his theory and its profound implications: for science, for religion, and for the future of our planet. A mind-bending journey through the furthest reaches of science, space-time, and the human imagination, Extraterrestrial challenges readers to aim for the stars-and to think critically about what's out there, no matter how strange it seems. I have a lot of time for Loeb. He has a joy in conjecture and an omnivorous spirit of inquiry that are more reminiscent of 20th-century thinkers such as Freeman Dyson or Carl Sagan than most of his peers. His readiness to stake his reputation on such an unconventional hypothesis is a mark of uncommon bravery . . . [Carl] Sagan would have liked this book -- Oliver Moody * The Times * Compelling . . . The book is not so much a claim for one object as an argument for a more open-minded approach to science - a combination of humility and wonder * New Statesman * An astronomical Sherlock Holmes . . . You don't have to share his conviction to be impressed by the breadth of his argument * Washington Post * In this passionately argued, visionary book, astrophysicist Avi Loeb urges us to abandon the arrogant fantasy that we are the only sentient life form in the universe. The clues are fascinating, and still more are Loeb's arguments for what they might reveal to us about our own brilliant, blinkered, and quite possibly doomed civilization -- STEPHEN GREENBLATT, Pulitzer prize-winning author of THE SWERVE A serious scientist makes a serious argument for the hypothesis that our solar system was visited by an object from an extraterrestrial civilization. Is the hypothesis right? Who knows. But let's try to find out! -- ERIC MASKIN, Nobel laureate in Economics It's good to be sceptical of audacious ideas. But it's also important to be open to audacious possibilities. Loeb's sumptuously written book will provoke you to think about the possibility of intelligent life elsewhere in the universe in new and stimulating ways -- SEAN CARROLL An exciting and eloquent case that we might have seen a sign of intelligent life near Earth - and that we should search further. World-renowned scientist and innovative thinker, Avi Loeb opens your mind to some of the most important questions facing us as humans: scientific curiosity is key to our future success -- ANNE WOJCICKI, CEO and co-founder, 23andMe A provocative and thrilling account of the search for extraterrestrial intelligence . . . Professor Loeb asks us to think big and to expect the unexpected -- ALAN LIGHTMAN, author of EINSTEIN'S DREAMS One of the more imaginative and articulate scientists around . . . half memoir, half soaring monologue * New Yorker * A persuasive scientific argument about 'Oumuamua's otherworldly origins, and delves into why his peers have been so hostile to the idea of life outside of Earth * New York Magazine * In publishing his theory, Loeb has certainly risked (and suffered) ridicule . . . Still, it's thrilling to imagine the possibilities * New Yorker * Have aliens ever been to our solar system? A quick trawl of the internet will reveal any number of people who think that they have, but when the suggestion comes from a distinguished Harvard astrophysicist, maybe it's time to sit up and take notice -- 4-star review * Mail on Sunday * He may or may not be right about 'Oumuamua. But that hardly seems to make much difference to what is ultimately the main thesis of his book . . . Mr Loeb is surely correct that scientists studying the vastness of the cosmos should entertain risky ideas more often, for the universe is undoubtedly more wild and unexpected than any extremes conjured by the human imagination. * The Economist * Fascinating and very accessible . . . certainly very well worth a read * Church of England Newspaper *