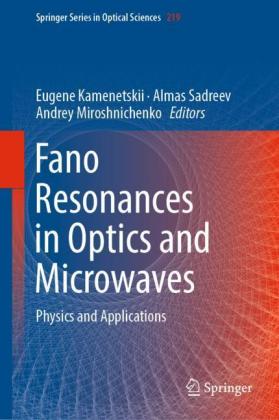 Fano Resonances in Optics and Microwaves

This book discusses the development of Fano-based techniques and reveals the characteristic properties of various wave processes by studying interference phenomena. It explains that the interaction of discrete (localized) states with a continuum of propagation modes leads to Fano interference effects in transmission, and explores novel coherent effects such as bound states in the continuum accompanied by collapse of Fano resonance. Originating in atomic physics, Fano resonances have become one of the most appealing phenomena of wave scattering in optics, microwaves, and terahertz techniques. The generation of extremely strong and confined fields at a deep subwavelength scale, far beyond the diffraction limit, plays a central role in modern plasmonics, magnonics, and in photonic and metamaterial structures. Fano resonance effects take advantage of the coupling of these bound states with a continuum of radiative electromagnetic waves. With their unique physical properties and unusual combination of classical and quantum structures, Fano resonances have an application potential in a wide range of fields, from telecommunication to ultrasensitive biosensing, medical instrumentation and data storage. Including contributions by international experts and covering the essential aspects of Fano-resonance effects, including theory, modeling and design, proven and potential applications in practical devices, fabrication, characterization and measurement, this book enables readers to acquire the multifaceted understanding required for these multidisciplinary challenges.

Fano Resonances in Optics and Microwaves

Fano resonances manifest novel phenomena both in linear and nonlinear response of plasmonicnano-materials. They can extend the lifetime of plasmonic excitations, enabling the operation nanolasers, or they can increase the fluorescence of quantum emitters. They also provide control over nonlinear optical processes such as second harmonic generation and four-wave mixing. Fano resonances can both enhance or suppress nonlinear response. Interference of two or more absorption/conversion paths is responsible for the appearance of these effects. In this Chapter, we demonstrate explicitly -on a single equation- how path interference takes part in linear and nonlinear Fano resonances.

While chiral or gyrotropic materials possess spinor 'wavefunctions' as their eigenvectors, optical spin 'observables' cannot be obtained in those materials due to the lack of spinor impedances. Additional non-conservative functions are thus required for deriving spin observables, such as circular dichroism or magneto-optical effects. In this chapter, a conservative approach for achieving optical spin will be described, by exploiting Fano spectral-separation of optical spins. Starting from spinor temporal coupled mode theory for 2D/3D chiral resonances, the origin of spin-Fano interactions is demonstrated: the link

between spinor eigenvectors in the polarization domain and anti-symmetric Fano resonances in the spectral domain. Compared with chiral, gyrotropic, and birefringent materials, novel applications of this spin-Fano resonance are discussed toward optical spintronics: including highly-selective spin switching and unpolarized operations.