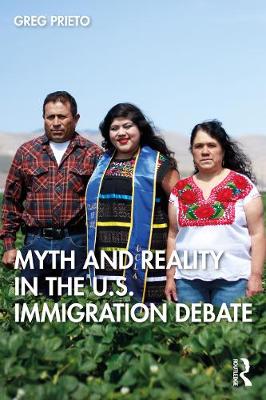 Myth and Reality in the U.S. Immigration Debate

"What part of illegal don't you understand?" This oft-repeated slogan from immigration restrictionists illustrates the contentious quality of the immigration reform debate in the United States: a debate that has raged on unresolved since at least 1986 when our immigration system was last reformed. This impasse is due, in large part, to widespread misinformation about immigration. This short and accessible textbook takes a critical perspective on immigration law and policy, arguing that immigrant "illegality" is itself produced by law, with tremendous consequences for individuals and families. Across six chapters that examine the conceptual, historical, economic, global, legal, and racial dimensions of immigration to the United States, Prieto argues that illegal immigration is a problem of policy, not people. History and cutting-edge social science data guide an analysis of the actual, empirical impact of immigration on U.S. society. By debunking myths about immigration, the reader is invited to form their own opinion on the basis of fact and in light of the unequal treatment different immigrant groups have received since the nation's founding. Myth and Reality in the U.S. Immigration Debate synthesizes key lessons from the fields of sociology, law and society, history, economics and critical race studies in a digestible and engaging format. This text will serve as an introduction to the study of immigration and a primer for those who wish to engage in a sober and compassionate conversation about immigrants and immigration in the United States.

Myth and Reality in the U.S. Immigration Debate


4. Harvest of Empire: Globalization and Immigration


5. "Get in Line": The Legal Immigration Queue and the Inequity of Equal Treatment


6. Conclusion: Race, Immigration, and the Moral Case for Reform