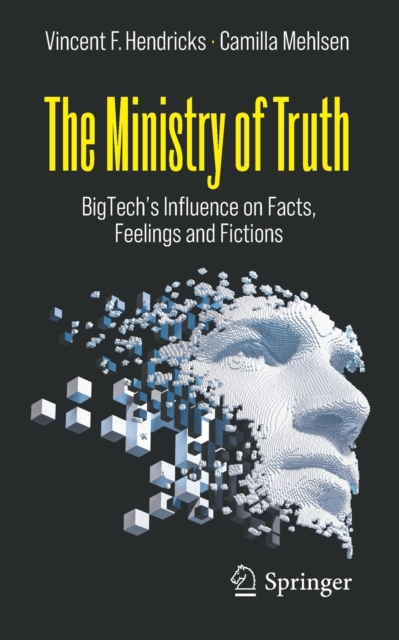 The Ministry of Truth: BigTech's Influence on Facts, Feelings and Fictions

The Ministry of Truth scrutinizes the information market in the era of the attention economy calling on citizens, public educators and politicians to action in averting the role of BigTech in critical infrastructure. Through phenomena such as influencers, 'fake news', and covid conspiracies, the authors reveal how social platforms control facts, feelings and narratives in our time to such a degree that they are the de facto arbiters of truth. BigTech seemingly controls the information infrastructure and also decides what we pay attention to.

The authors suggest hope for a more democratic internet through their systematic analysis of the largest players of the information age. The aim is to amplify human agency for a robust deliberative democracy - not version 2.0 - but a lasting version with staying power. This book appeals to the general interest reader and professional invested in the mobilization of responsible technological development.

Vincent F. Hendricks is Professor of Formal Philosophy at The University of Copenhagen. He is Director of the Center for Information and Bubble Studies (CIBS) funded by the Carlsberg Foundation.

Camilla Mehlsen is Digital Media Expert and Spokesperson for the Danish child organization Children's Welfare. She is author of several books on digital literacy and her work on digital media has been published in various newspapers and magazines.

The Ministry of Truth: BigTech's Influence on Facts, Feelings and Fictions

Prologue. BigTech, Big ProblemsChapter 1. From Citizen to User in the Marketplace of IdeasChapter 2. From User to Product in the Era of Attention EconomyChapter 3. Designed Denial: Infodemics and Fake NewsChapter 4. Boobs and Borderline ContentChapter 5. Influencers and SuperspreadersChapter 6. Clandestine CasinoChapter 7. Arbiters of TruthChapter 8. What Now!?