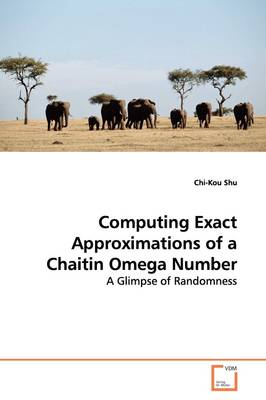 Computing Exact Approximations of a Chaitin Omega Number: A Glimpse of Randomness

In this monograph,the research aimed to compute
some exact bits of a Chaitin Omega number. A Chaitin
Omega numbers are halting probabilities of a specific
mathematical model of the ubiquitous PC called 'self-
delimiting Turing machine'. In 1936,Turing showed
that no mechanical procedure and therefore no formal
axiomatic theory can solve Turing's halting problem,
the question of whether a given computer program will
eventually halt. An Omega number combines all
instances of Turing's halting problem into a
paradoxical real number. Its binary digits or bits
are algorithmically random and cannot be
distinguished from the the result of independent toss
of a fair coin.

Omega has a simple mathematical definition,but it
does not enable us to determine more than finitely
many of its digits and no other definition can do it
better. Furthermore,as nobody before was able to
compute any exact bit of a natural Omega number,
the carrying on the computation is much more
demanding than solving Turing's halting problem.
We reviewed the properties of Omega numbers leading
to the computation of approximations to obtain
initial exact 64 bits of a Chaitin Omega number.

Computing Exact Approximations of a Chaitin Omega Number: A Glimpse of Randomness