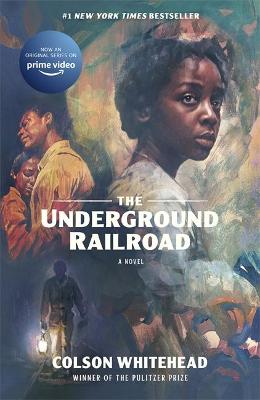 WINNER OF THE PULITZER PRIZE FOR FICTION 2017

LONGLISTED FOR THE MAN BOOKER PRIZE 2017

'Whitehead is on a roll: the reviews have been sublime' Guardian

'Hands down one of the best, if not the best, book I've read this year' Stylist


Praised by Barack Obama and an Oprah Book Club Pick, The Underground Railroad by Colson Whitehead won the National Book Award 2016 and the Pulitzer Prize for Fiction 2017.

Cora is a slave on a cotton plantation in Georgia. All the slaves lead a hellish existence, but Cora has it worse than most; she is an outcast even among her fellow Africans and she is approaching womanhood, where it is clear even greater pain awaits. When Caesar, a slave recently arrived from Virginia, tells her about the Underground Railroad, they take the perilous decision to escape to the North.

In Whitehead's razor-sharp imagining of the antebellum South, the Underground Railroad has assumed a physical form: a dilapidated box car pulled along subterranean tracks by a steam locomotive, picking up fugitives wherever it can. Cora and Caesar's first stop is South Carolina, in a city that initially seems like a haven. But its placid surface masks an infernal scheme designed for its unknowing black inhabitants. And even worse: Ridgeway, the relentless slave catcher sent to find Cora, is close on their heels. Forced to flee again, Cora embarks on a harrowing flight, state by state, seeking true freedom.

At each stop on her journey, Cora encounters a different world. As Whitehead brilliantly recreates the unique terrors for black people in the pre-Civil War era, his narrative seamlessly weaves the saga of America, from the brutal importation of Africans to the unfulfilled promises of the present day. The Underground Railroad is at once the story of one woman's ferocious will to escape the horrors of bondage and a shatteringly powerful meditation on history. It has invaded both my sleeping and waking thoughts . . . Each character feels alive with a singular humanity . . . Whitehead is on a roll, the reviews have been sublime * Guardian * An engrossing and harrowing novel * Sunday Times * [A] brutal, vital, devastating novel...This is a luminous, furious, wildly inventive tale that not only shines a bright light on one of the darkest periods of history, but also opens up thrilling new vistas for the form of the novel itself * Observer * This thrilling tale of escape from a deep south plantation takes in terror, beauty and the history of human tragedy..This uncanny novel never attempts to deliver a message - instead it tells one of the most compelling stories I have ever read. Cora's strong, graceful hands touch on the greatest tragedies of our history * Cynthia Bond, Guardian * It's so good it's hard to praise it without whipping out the cliches: it's an elegant, devastating powerhouse of a book, following a young black woman all over America as she tries to escape the horrors of slavery. When it was published with Oprah's imprimatur, in August, it was universally acclaimed. It deserved it * Guardian * One of the best, if not the best, book I've read this year . . . Whitehead never exploits his subject matter, and in fact it's the sparseness of the novel that makes it such a punch in the gut * Stylist * My book of the year by some distance...It's a profound and important novel, but more than anything it's an absurdly good read, gripping you in its tightly wound plot, astonishing you with its leaps of imagination. If Whitehead doesn't win every prize going next year, I'll appear on Saturday Review in my underpants * Observer, Best Fiction of 2016 * Whitehead is a superb storyteller . . . [he] brilliantly intertwines his allegory with history . . . writing at the peak of his game . . . Whitehead's achievement is truly remarkable: by giving the Underground Railroad a new mythology, he has found a way of confronting other myths, older and persistent, about the United States. His book cannot have enough readers * Telegraph * It is an extraordinary novel, a rich, confident work that will deservedly win - on the basis of literary merit as well as moral purpose . . . History and human experience as well as an artist's obligation to tell the truth have shaped a virtuoso novel that should be read by every American as well as readers across the world. And it will be, it should be * Irish Times * An utterly transporting piece of storytelling * The Pool * Bestselling author Colson Whitehead's novel is a searing indictment of slavery with a detailed inventory of man's inhumanity to man - and Cora's flight is a harrowing and shocking trip for the reader * Daily Mail * A stunning, brutal and hugely imaginative book. It's a favourite of both Oprah Winfrey and Barack Obama. It is painful history re-imagined in a powerful and brilliant way * Emerald St * Recommended by none other than Obama AND Oprah, The Underground Railroad arrives deserving every last drop of hype that's come its way . . . There are many twists and turns in Cora's long, treacherous journey towards freedom and while The Underground Railroad is at times brutal and disturbing, it's also hopeful and an addictive, compulsive read. After reading it, a corner of your heart will always belong to Cora. An instant classic * Red * Reaches the marrow of your bones, settles in and stays forever . . . a tour de force This bravura novel reimagines that same network as a real subterranean railway, upon which a girl named Cora flees the slave-catcher Ridgeway. Throughout, horrific experiences are rendered in lapidary prose, but it's Cora's daring that provides the story's redemptive oomph * Mail on Sunday * Inventive and hard-hitting * Metro * It is a bold way of reimagining the slave experience and, in the capable hands of Whitehead, succeeds triumphantly * Mail on Sunday * Brutal, tender, thrilling and audacious * Guardian * An enchanting tale . . . full of vivid images, learned allusions and astute observations . . . The most important and acclaimed American novel of the past year * London Review of Books * I stayed up way too late to finish this... It will be haunting me in the best way * Celeste Ng, author of Everything I Never Told You * A fantastical picaresque through the dark side of American history * Daily Telegraph * Thrilling and unsentimental * Scotsman * The Underground Railroad is a noble descendant of the great narratives of slavery, and among the very finest of its novels * Times Literary Supplement * An audaciously imagined and profoundly moving novel * Express * Stunning and unsentimental . . . required reading * Herald * A charged and important novel that pushed at the boundaries of fiction * Guardian, Best Books of 2016 * Leaves the reader with a devastating understanding of the terrible human costs of slavery . . . with echoes of Toni Morrison's Beloved, Victor Hugo's Les Miserables and Ralph Ellison's Invisible Man, and with brush strokes borrowed from Jorge Luis Borges, Franz Kafka and Jonathan Swift . . . Colson Whitehead has told a story essential to our understanding of the American past and the American present * New York Times * The Underground Railroad isn't the modern slave narrative it first appears to be. It is something grander and more piercing, a dazzling antebellum anti-myth...Whitehead's prose is quick as a runaway's footsteps * New York Review of Books * A book that resonates with deep emotional timbre. The Underground Railroad reanimates the slave narrative, disrupts our settled sense of the past and stretches the ligaments of history right into our own era . . . The story charges along with incredible power . . . The canon of essential novels about America's peculiar institution just grew by one * Washington Po