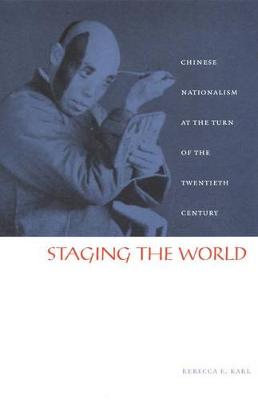 Staging the World: Chinese Nationalism at the Turn of the Twentieth Century

In Staging the World Rebecca E. Karl rethinks the production of nationalist discourse in China during the late Qing period, between China's defeat in the Sino-Japanese War in 1895 and the proclamation of the Republic in 1911. She argues that at this historical moment a growing Chinese identification with what we now call the Third World first made the modern world visible as a totality and that the key components of Chinese nationalist discourse developed in reference to this worldview. The emergence of Chinese nationalism during this period is often portrayed as following from China's position vis-a-vis Japan and the West. Karl has mined the archives of the late Qing period to discern the foci of Chinese intellectuals from 1895 to 1911 to assert that even though the China/Japan/West triangle was crucial, it alone is an incomplete-and therefore flawed-model of the development of nationalism in China. Although the perceptions and concerns of these thinkers form the basis of Staging the World, Karl begins by examining a 1904 Shanghai production of an opera about a fictional partition of Poland and its modern reincarnation as an ethno-nation. By focusing on the type of dialogue this opera generated in China, Karl elucidates concepts such as race, colonization, globalization, and history. From there, she discusses how Chinese conceptions of nationalism were affected by the "discovery" of Hawai'i as a center of the Pacific, the Philippine revolution against the United States, and the relationship between nationality and ethnicity made apparent by the Boer War in South Africa.

Staging the World: Chinese Nationalism at the Turn of the Twentieth Century

3. Deterritorializing Politics: The Pacific and Hawaii as Chinese National Space

4. Recognizing Colonialism: The Philippines and Revolution

5. Promoting the Ethnos: The Boer War and Discourses of the People

6. Performing on the World Stage in Asia