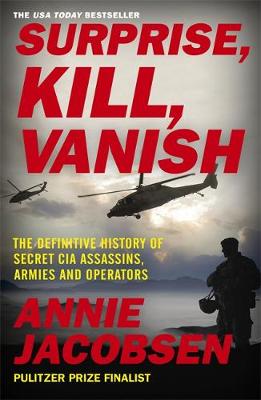 'A behind-the-scenes look at the most shadowy corners of the American intelligence community...Well-sourced and well-paced, this book is full of surprises' Kirkus

'Annie Jacobsen takes us inside the darkest and most morally ambiguous corner of our government, where politicians ask brave men and women to kill-up close and personal-on America's behalf' Garrett M. Graff, author of Raven Rock: The Story of the U.S. Government's Secret Plan to Save Itself - While the Rest of us Die

'This is a first rate book on the CIA, its paramilitary armies, operators, and assassins' New York Journal of Books

'Having already demonstrated her remarkable aptitude for unearthing government secrets in books like Area 51 (2011) and The Pentagon's Brain (2015), Jacobsen pulls back the curtain on the history of covert warfare and state sanctioned assassinations from WWII to the present...Jacobsen's work revealing a poorly understood but essential slice of warfare history belongs in every library collection' Booklist

The definitive, character-driven history of CIA covert operations and U.S. government-sponsored assassinations, from the author of the Pulizter Prize finalist The Pentagon's Brain

Since 1947, domestic and foreign assassinations have been executed under the C IA-led covert action operations team. Before that time, responsibility for taking out America's enemies abroad was even more shrouded in mystery. Despite Hollywood notions of last-minute rogue-operations and external secret hires, covert action is actually a cog in a colossal foreign policy machine, moving through, among others, the Bureau of Intelligence and Research, the House and Senate Select Committees. At the end of the day, it is the President, not the C IA, who is singularly in charge.

For the first time, Pulitzer Prize finalist and New York Times bestselling author Annie Jacobsen takes us deep inside this top-secret history. With unparalleled access to former operatives, ambassadors, and even past directors of the Secret Service and CIA operations, Jacobsen reveals the inner workings of these teams, and just how far a U.S. president may go, covertly but lawfully, to pursue the nation's interests. Praise for Annie Jacobsen: Cauldron-stirring . . . revelatory . . . compellingly hard-hitting * New York Times * A fascinating and sometimes uneasy exploration * Washington Post *