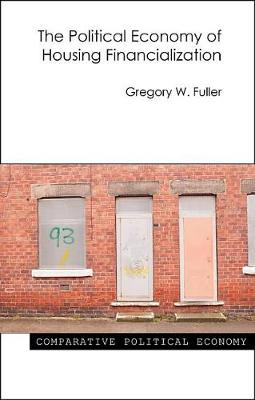 The Political Economy of Housing Financialization

The US subprime mortgage crisis, by nearly causing the collapse of the global financial system during the 2007-08 financial crisis, clearly revealed that household debt management is critical to the stability of the international economy. The configuration of mortgage finance systems of European economies, from the UK to Sweden to Spain, have profound effects on national macroeconomic and political outcomes. In this book, Gregory Fuller reveals how national housing systems diverge in terms of their commodification and financialization: mortgages are far more common in some systems than others; some encourage families to treat housing as a tradeable asset while others do not; and certain states provide extensive social housing programmes while others offer virtually none. These differences are shown to have an impact on households' economic precarity, macroeconomic volatility, and ultimately on their political preferences. Drawing on these comparisons, Fuller offers a number of policy suggestions intended to weaken the links between housing, economic instability, and inequality. In this superb new book, Gregory Fuller fills a void in comparative political economy by forcing the reader to systematically engage with the phenomenon of housing financialization. Combining an elegant theoretical frame with compelling evidence, Fuller shows how the great debt transformation since the 1970s - and the central role housing financialization played in it - has had serious consequences for heightened macroeconomic instability, widening inequality, and the rise of populism in our politics. Political economy scholarship at its best. -- Matthias Matthijs, Johns Hopkins University An accessible and forthright examination of the centrality of housing and housing finance to economic instability, inequality and other key social issues facing contemporary Europe. -- Brett Christophers, Uppsala University A welcome addition ... this book will help researchers focus their attention and research effort on the important and complex intersections of housing, financial markets and inequality. -- Intergenerational Justice Review

The Political Economy of Housing Financialization