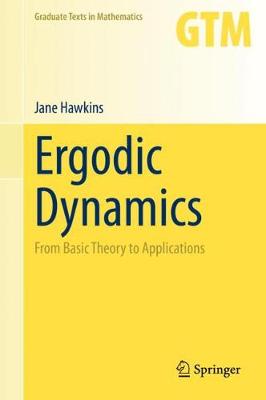 $112.43 (with VAT)
499.80 PLN / €107.16 / £93.02
Delivery to United States
check shipping prices
Forthcoming
Would you like to be informed when the book becomes available? Please provide your e-mail address and you will be the first to know:
Add to bookshelf

This textbook provides a broad introduction to the fields of dynamical systems and ergodic theory. Motivated by examples throughout, the author offers readers an approachable entry-point to the dynamics of ergodic systems. Modern and classical applications complement the theory on topics ranging from financial fraud to virus dynamics, offering numerous avenues for further inquiry.

Starting with several simple examples of dynamical systems, the book begins by establishing the basics of measurable dynamical systems, attractors, and the ergodic theorems. From here, chapters are modular and can be selected according to interest. Highlights include the Perron-Frobenius theorem, which is presented with proof and applications that include Google PageRank. An in-depth exploration of invariant measures includes ratio sets and type III measurable dynamical systems using the von Neumann factor classification. Topological and measure theoretic entropy are illustrated and compared in detail, with an algorithmic application of entropy used to study the papillomavirus genome. A chapter on complex dynamics introduces Julia sets and proves their ergodicity for certain maps. Cellular automata are explored as a series of case studies in one and two dimensions, including Conway's Game of Life and latent infections of HIV. Other chapters discuss mixing properties, shift spaces, and toral automorphisms.

Ergodic Dynamics unifies topics across ergodic theory, topological dynamics, complex dynamics, and dynamical systems, offering an accessible introduction to the area. Readers across pure and applied mathematics will appreciate the rich illustration of the theory through examples, real-world connections, and vivid color graphics. A solid grounding in measure theory, topology, and complex analysis is assumed; appendices provide a brief review of the essentials from measure theory, functional analysis, and probability.