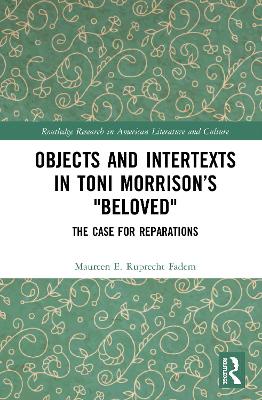 Objects and Intertexts in Toni Morrison's "Beloved": The Case for Reparations

Objects and Intertexts in Toni Morrison's Beloved: The Case for Reparations is an inspired contribution to the scholarship on one of the most influential American novels and novelists. The author positions this contemporary classic as a meditation on historical justice and re-comprehends it as both a formal tragedy-a generic translation of fiction and tragedy or a "novel-tragedy" (Kliger)-and as a novel of objects. Its many things-literary, conceptual, linguistic-are viewed as vessels carrying the (hi)story and political concerns. From this a third conclusion is drawn: Beloved as a case for reparations. Fadem argues that that status is founded on two outstanding object lessons: the character of Beloved as embodiment of the subject-object relations defining the slave state and the grammatical object "weather" in the sentence "The rest is..." on the novel's final page, an intertextual reference placing Beloved in a comparative link with Hamlet and Oresteia. Fadem's research is meticulous in engaging the full spectrum of tragedy theory, much critical theory, and a full swathe of scholarship on the novel. Few critics take up the matter of reparations, still fewer the politics of genre, craft, and form. This scholar posits Morrison's tragedy as constituting a searing critique of modernity, as composed through meaningful intertextualities, and as crafted by profound "thingly" objects (Brown). Altogether Fadem has divined a fascinating new reading and singular treatment of Beloved exploring the connections between form and craft together with critical historical and political implications. The book argues finally that this novel's first concern is justice and its chief aim is to serve as a clarion call for material-and not merely symbolic-reparations.

Objects and Intertexts in Toni Morrison's "Beloved": The Case for Reparations

Foreword: Too Many, Too Quiet, Too Long; or, "Anything is better than the silence"

One: Remembering Is Not Forgetting; or, History Is in the Texts of It


Two: Tragedy and Its Props; or, History Is in the Things of It

Three: Literary Memory and the Amnesiac Nation; or, "The rest is weather"


Four: Bodies [sic] Matter; or, "Certainly no clamor for a kiss"


Five: The Powers of Intertextuality, the Spectre of Reparations; or, Three Tragedies and a Critique of the American Slave State

Afterword: First Things, Lost Things; or, The Purloined Name and the Necessity of (Postcolonial) Failure

Coda: Impossible Things; or, "I've had enough of shitty news"