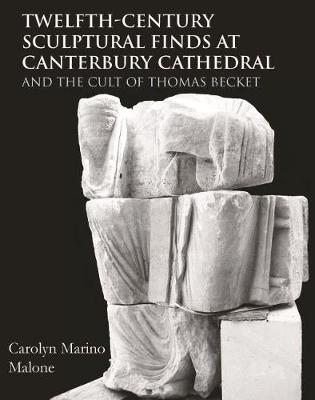 This study reconstructs twelfth-century sculptural and architectural finds, found during the restoration of the Perpendicular Great Cloister of Christ Church, Canterbury, as architectural screens constructed around 1173. It proposes that the screens provided monastic privacy and controlled pilgrimage to the Altar of the Sword's Point in the Matrydom, the site of Archbishop Thomas Becket's murder in 1170. Excavations in the 1990s discovered evidence of a twelfth-century tunnel leading to the Matyrdom under the crossing of the western transept. Constuction would have required rebuilding the crossing stairs and the screens flanking the crossing. The roundels, portraying lions, devils, a 'pagan', Jews, and a personification of the synagogue, are reconstucted on the south side of the crossing as a screening wall framing the entrance to this tunnel. The quatrefoils with images of Old Testament prophets are reconstructed as a rood screen on the west side of the crossing. In the Matyrdom, a screen, is proposed with, perhaps, the earliest known sculptural representation of Thomas Becket. The rood screen, located behind the Altar of the Holy Cross, would have provided a visual focus during Mass, monastic processions, and sermons, especially during Christmas and Holy Week. The row of prophets, pointing upwards at the Rood, would have functioned as the visual equivalent of the dialogue of the `Ordo prophetarum' that predicted the Messiah as proof to Jews and other unbelievers of Christian redemption. The roundels, just around the corner on the south screening wall, can be interpreted as representing the unbelieving Other and forces of evil warning pilgrims to seek penance at the altar of the newly canonized St Thomas. In addition to this new interpretation, a catalog raisonne and an account of the discovery of the finds offers material for future research that has been unavailable to previous studies. All the finds were photographed by the author as the restoration progressed and 16 pieces have since been lost, making some of the unpublished photographs essential evidence of the archaeological record.

Acknowledgments
List of illustrations
Part I Screens and the Cult of St Thomas
Introduction
1. Previous studies and the location of the finds
The king reliefs
Earlier scholarship
Prior Chillenden's constructions
Conclusion
2. Dating of the sculpture and architectural fragments
Carving techniques
Figurative sculpture
Foliage decoration
Architectural motifs
Regional impact
Conclusion
3. Christ Church, Canterbury (1170-1175)
Becket's murder in the north arm of the transept
Analysis of Gervase's description
Crossing of the western transept
South arm of the transept
North arm of the transept (the Martyrdom)
Late twelfth-century alterations in the crossing
Prior Odo (1168-1175)
Pilgrimage (1171-1175)
Conclusion
4. Reconstruction of the screens in the western transept
The Martyrdom
North-south partitioning screen and north screen
East side of partitioning screen and north screen
West side of partitioning screen
Southern entrance to the tunnel
Excavations
South screen
East side of the crossing
Rood screen
Conclusion
5. The quatrefoils: prophecy and the theology of redemption
The gestures of the prophets
The rood screen as a liturgical focus
Prophetic testimony in images and texts
Liturgical drama
Ysagoge in Theologiam
Inscribed images of prophets and liturgical texts
The Incarnation: Advent and Christmas
Mass at the Altar of the Holy Cross
The Passion: Holy Week
Conclusion
6. The roundels: the Church's Other
Lions, demons, Jews and a pagan
Synagoga
The unbeliever
Canterbury's Jewish community
Conclusion
Conclusion
Plates, Reconstructions
Part II Twelfth-Century Finds from the Perpendicular Great Cloister
Introduction to the catalogue
Catalogue
A. Statue segments
B. Quatrefoils
C. Roundels
D. Shaft-rings
E. Arch elements
Hood-moulds and head-stops
Beaded hood-moulds
Voussoirs
F. String-course and related elements
G. Capitals and base
H. Purbeck elements
Comparative charts with dimensions of the limestone finds
Bibliography
Index