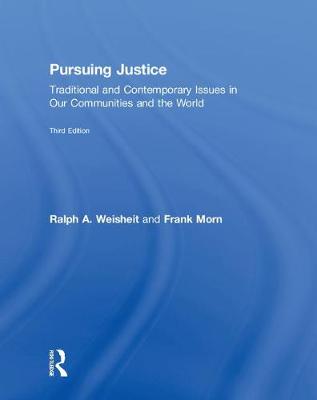 Pursuing Justice: Traditional and Contemporary Issues in Our Communities and the World

Pursuing Justice, Third Edition, examines the issue of justice by considering the origins of the idea, formal systems of justice, current global issues of justice, and ways in which justice might be achieved by individuals, organizations, and the global community. Part I demonstrates how the idea of justice has emerged over time, starting with religion and philosophy, and then to the concept of social justice. Part II outlines the very different mechanisms used by various nations for achieving state justice, including systems based on common law, civil law, and Islamic law, with a separate discussion of the US justice system. Part III focuses on six contemporary issues of justice: war, immigration, domestic terrorism, genocide, slavery, and the environment. Finally, Part IV shows how individuals and organizations can go about pursuing justice, and describes the rise of global justice. This updated timely book helps students understand the complexities and nuances of a society's pursuit of justice. It provides students with the foundations of global justice systems, integrating Greek philosophies and major religious perspectives into a justice perspective, and contributes to undergraduate understanding of international justice bodies, NGOs, and institutions. New to the third edition is a complete chapter on immigration, with a focus on historical and global patterns as they relate to justice, as well as new material on the #MeToo and Black Lives Matter movements, the genocide of the Rohingya of Myanmar, and the sovereign citizens movement in relation to domestic terrorism.

Pursuing Justice: Traditional and Contemporary Issues in Our Communities and the World

Part I. What is Justice?


3. Justice and the State


Conclusion: Justice as an Evolving Concept