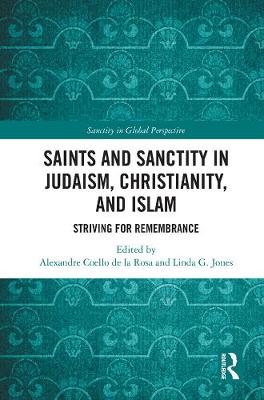 Saints and Sanctity in Judaism, Christianity, and Islam: Striving for remembrance

A common objective of saint veneration in all three Abrahamic religions is the recovery and perpetuation of the collective memory of the saint. Christianity, Judaism, and Islam all yield intriguing similarities and differences in their respective conceptions of sanctity. This edited collection explores the various literary and cultural productions associated with the cult of saints and pious figures, as well as the socio-historical contexts in which sainthood operates, in order to better understand the role of saints in monotheistic religions. Using comparative religious and anthropological approaches, an international panel of contributors guides the reader through three main concerns. They describe and illuminate the ways in which sanctity is often configured. In addition, the diverse cultural manifestations of the cult of the saints are examined and analysed. Finally, the various religious, social, and political functions that saints came to play in numerous societies are compared and contrasted. This ambitious study covers sanctity from the Middle Ages until the contemporary period, and has a geographical scope that includes Europe, Central Asia, North Africa, the Americas, and the Asian Pacific. As such, it will be of use to scholars of the history of religions, religious pluralism, and interreligious dialogue, as well as students of sainthood and hagiography.

Saints and Sanctity in Judaism, Christianity, and Islam: Striving for remembrance


Part I: Holiness, Saints, and Sanctity in Judaism, Christianity, and Islam


2 Holiness, Saints, and Sanctity in Judaism


3 Holiness, Saints, and Sanctity in Christianitnity


6 Models of Sanctity in the Medieval Islamic West: The Cases of Abu Ya'za and al-Yuhanisi".
Rachid El Hour


8 Masculinity, Sexuality, and Sanctity in the Ottoman Hagiographical Narratives: The Case of the Velayet-name-i Haci Bektas-i Veli